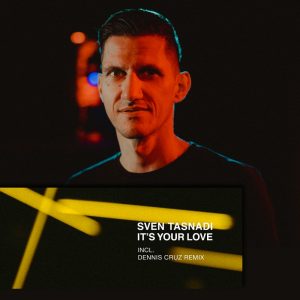 One month before his latest and greatest album Bridges lands on Moon Harbour, Sven Tasnadi serves up a tasty single from it with a brilliant remix from man of the moment, Dennis Cruz.

The forthcoming album finds German artist Tasnadi link with a number of collaborators and friends from Huxley to Supernova to David Jach. It is an authentic house record filled with his infectious grooves, and one designed to bring people together. The excellent lead single ‘It’s Your Love’ is a solo track from it with a big heart. Soulful vocal samples are stitched into the loose percussive groove and rolling kick drums hook you in from the start as a sax drifts up to to bring a carefree feel.

Remixing is Dennis Cruz, a Spanish talent constantly clocking up plenty of Beatport and underground hits, being charted by all the key DJs in the scene and releasing on labels like Stereo Productions, Snatch! Suruba and many more. He has played all over the world from Europe to Australia, the States to Russia, and this summer he’s had another big hit with the ubiquitous ‘El Sueño’.

His hot house version has an instant impact with its tight snares and upright drums. Icy hi hats and chopped up vocals build the pressure and when the kicks land the whole thing powers forwards and will get hands very much in the air.

These two tracks are a great starter before the much-anticipated main course lands in November 2018.